The Democratisation of Art

Travelling the world in order to visit the top museums and galleries used to be the preserve of the well-heeled with sufficient time on their hands.

At any one time, only an infinitesimal number of the works by the great masters are on public display, while the majority languish behing closed doors in darkened storerooms, or are hidden away in private collections, only to come to the public’s attention when they are being put up for auction.

With the advent of the internet, the doors have been flung open, and high-resolution images of the works have become available for us all to see. Using clever 3D photography, we can now go on virtual visits to the great art galleries, and zoom in on any canvas that takes our fancy. 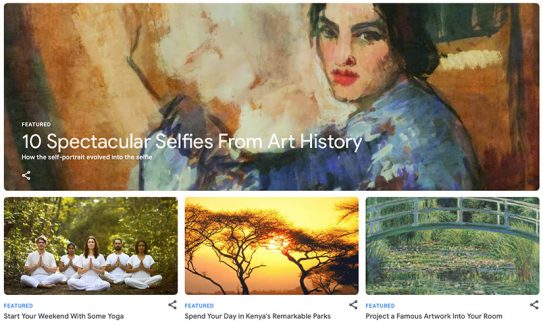 Google Arts and Culture features content from over 2,000 leading museums and archives who have partnered with the Google Cultural Institute to bring the world’s art treasures online.

Click on the image to visit Google Arts and Culture collections

The project involved taking a selection of super high resolution images of famous artworks, as well as collating more than 30,000 other images into one place. 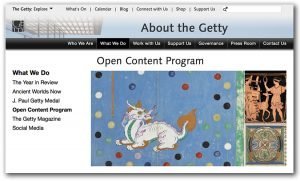 Over 100,000 images from the J. Paul Getty Museum and the Getty Research Institute have been made available through the Getty Open Content Program, including more than 72,000 from the Research Institute’s Foto Arte Minore archive, which features photographs of the art and architecture of Italy over 30 years by German photographer and scholar Max Hutzel.

The Getty makes available, without charge, all available digital images to which the Getty holds the rights or that are in the public domain, to be used for any purpose. No permission is required.

The Open Content Program is not connected in any way with Getty Images.

Welcome to the nation’s art 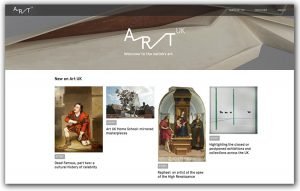 Art UK is a cultural education charity in the United Kingdom, which was previously known as the Public Catalogue Foundation. Since 2003 it has digitised over 220,000 paintings by over 40,000 artists and is now expanding the digital collection to include UK public sculpture.

Its purpose is to enable the public to see images of all the approximately 210,000 oil paintings in public ownership in the United Kingdom. Originally the paintings were made accessible through a series of affordable book catalogues, mostly by county. Later the same images and information were placed on a website in partnership with the BBC, originally called Your Paintings, hosted as part of the BBC website. The renaming in 2016 coincided with the transfer of the website to a stand-alone site. Works from over 3,000 collections are now on the website.

The Royal Academy of Arts 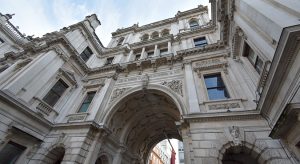 The Royal Academy of Arts is based in Burlington House on London’s Piccadilly. It has a unique position as an independent, privately funded institution led by eminent artists and architects. Its purpose is to promote the creation, enjoyment and appreciation of the visual arts through exhibitions, education and debate.

The institution was founded by King George III in 1768 and initially housed in cramped quarters in Pall Mall, then moved to Somerset House in the Strand in 1771. The Academy relocated again in 1837 to Trafalgar Square, where it occupied the east wing of the recently completed National Gallery. These premises soon proved too small to accommodate both institutions, and in 1868, one hundred years after its foundation, the Academy moved to Burlington House, where it remains.

A comprehensive collection of the works of Royal Academy artists can be consulted online.

The British Film Institute (BFI) is a film and charitable organisation which promotes and preserves filmmaking and television in the United Kingdom. It uses lottery funds to encourage film production, distribution, and education. It is sponsored by the Department for Digital, Culture, Media and Sport.

The BFI maintains the world’s largest film archive, the BFI National Archive. The archive contains more than 50,000 fiction films, over 100,000 non-fiction titles, and around 625,000 television programmes. The majority of the collection is British material but it also features internationally significant holdings from around the world.

It runs the BFI Southbank and London IMAX Cinema, both located on the south bank of the River Thames in London, and offers a range of education initiatives, in particular to support the teaching of film and media studies in schools.

It also organises the annual London Film Festival along with BFI Flare.

You can watch films online on BFI Player.