In the year 2005, a group of us hatched a plan to meet once a month for drinks in a Central London pub. Nobody would have predicted that this arrangement would last as long as it has.

The covid pandemic forced us to temporarily suspend our pub nights in the spring of 2020, but we hope that normal business will be resumed in the summer of 2021. 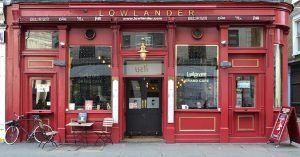 Our first pub night took place at the Lowlander Grand Café at 36 Drury Lane, in October 2005. This establishment serves traditional Belgian beers, and is very popular. And there was our problem: It was so crowded that we were unable to hold a sensible conversation all evening.

For eight years the Penderel’s Oak in High Holborn, a Wetherspoon’s pub, used top be our regular home.

It is situated at 283-288 High Holborn, London WC1V 7HP. It occupies the ground floor and basement of Penderel House, named after Richard Penderel, who in 1651 helped the future King Charles II to escape from Cromwell’s Roundhead troops after the Battle of Worcester, by hiding the royal fugitive in an oak tree on his country estate.

Then, a mere three months later, in December 2013, disaster struck…

One of our group – we won’t mention his name here to spare his blushes – got into an argument with the pub manager when he was overlooked waiting to be served at the bar, and he was promptly banned from the premises. In his defence, the whole affair was a bit of a misunderstanding. But the upshot of this debacle was that we had to find a new home in a hurry.