The whole world at your fingertips

A few short years ago, one needed an extensive library when trying to establish the most basic facts on any subject, only to find that the information was probably out of date already. In today’s internet age, we can access the world’s best reference works online, thus putting the most up-to-date research at our disposal in an instant.

Click on the image to visit the English Wikipedia main page

Wikipedia is a multilingual, web-based, free-content encyclopedia project supported by the Wikimedia Foundation and based on a model of openly editable content.

It is written collaboratively by largely anonymous volunteers who write without pay. Anyone with Internet access can write and make changes to Wikipedia articles, except in limited cases where editing is restricted to prevent disruption or vandalism.

Since its creation in 2001, Wikipedia has grown into the world’s largest reference website, attracting 1.5 billion unique visitors monthly as of March 2020. It has more than 52 million articles in more than 300 languages, including over 6 million of them in English.

DuckDuckGo – The search engine that doesn’t track you

The company name is a reference to the children’s game duck, duck, goose.

The amount of data some search engines collect on their users today is frankly alarming.

The team at Startpage has developed online tools that help you stay in control of your personal information. Why? Because it’s their belief that personal data should be your data, not Big Data. Period.

Here they describe how they have made search private: “You can’t beat Google when it comes to online search. So we’re paying them to use their brilliant search results in order to remove all trackers and logs. The result: The world’s best and most private search engine. Only now you can search without ads following you around, recommending products you’ve already bought. And no more data mining by companies with dubious intentions.”

Public libraries in the United Kingdom feature many online resources. Some of these are paid-for subscription services which are offered free of charge to their members.

Residents can join a public library for free, and the collection of 24/7 content can be accessed anywhere that has internet access – all that is required is the library card number and pin.

Among the resources on offer are Britannica Online, the Times Digital Archive, Who’s Who, Ancestry Library Edition, Oxford Reference Online, the full version of the Oxford English Dictionary,  Oxford Grove Art, Oxford Grove Music, the Oxford Dictionary of National Biography, and much more.

Click on the image to visit the main Government site

The websites of all government departments and many other agencies and public bodies have been merged into GOV.UK.

Click on the image to visit the NHS site

The National Health Service (NHS) is the publicly funded healthcare system of the United Kingdom. It was established in 1948 as one of the major social reforms following the Second World War. The founding principles were that services should be comprehensive, universal and free at the point of delivery. 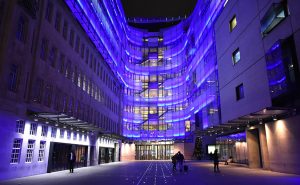 Click on the image to visit the main BBC homepage

Or, to give it its full title, the British Broadcasting Corporation. Founded in 1922, it is the oldest national broadcaster, and the largest broadcaster in the world by number of employees.

Its mission is “to act in the public interest, serving all audiences through the provision of impartial, high-quality and distinctive output and services which inform, educate and entertain”.

BBC Online is the BBC’s online service. It is a large network of websites including such high-profile sites as BBC News and Sport, the on-demand video and radio services co-branded BBC iPlayer, the children’s sites CBBC and CBeebies, and learning services such as Bitesize.

The web-based service of the BBC is one of the most visited websites, and the world’s largest news website.

Click on the image to visit the Met Office site

First established in 1854, the Met Office is the national meteorological service for the UK. It provides critical weather services and world-leading climate science, helping the population make better decisions to stay safe and thrive.

It makes meteorological predictions across all timescales from weather forecasts to climate change.

Since 2005, wikiHow has helped billions of people to learn how to solve problems large and small. It works with credentialed experts, a team of trained researchers, and a devoted community to create the most reliable, comprehensive and delightful how-to content on the Internet.