Click on the image to take a 3D tour

St Paul’s Cathedral is one of the most iconic sights of London.

Its dedication to Paul the Apostle dates back to the original church on this site, founded in AD 604.

The present cathedral, dating from the late 17th century, and designed in the English Baroque style by Sir Christopher Wren, replaced a medieval church often referred to as Old St Paul’s, which was destroyed during the Great Fire of London in 1666.

The Tower of London

Its construction started in the year 1066 as part of the Norman Conquest of England. The White Tower, which gives the entire castle its name, was built by William the Conqueror in 1078.

It served as a royal residence, a prison, an armoury, a treasury, a menagerie, the home of the Royal Mint, a public record office, and the home of the Crown Jewels of England.

Today, it is one of the country’s most popular tourist attractions. Under the ceremonial charge of the Constable of the Tower, and operated by the Resident Governor of the Tower of London and Keeper of the Jewel House, the property is cared for by Historic Royal Palaces and is protected as a World Heritage Site. 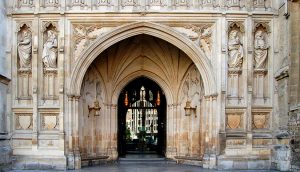 Westminster Abbey was formally known as the Collegiate Church of Saint Peter at Westminster. It is a large, mainly Gothic abbey church situated to the west of the Palace of Westminster. One of the United Kingdom’s most notable religious buildings, it has been the traditional place of coronation and burial for English and, later, British monarchs.

The Palace of Westminster 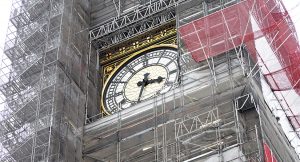 The Palace of Westminster serves as the home of both the House of Commons and the House of Lords, the two houses of the Parliament of the United Kingdom. Commonly known as the Houses of Parliament, the Palace lies on the north bank of the River Thames.

The first royal palace constructed on the site dated from the 11th century, and Westminster became the primary residence of the Kings of England until fire destroyed much of the complex in 1512. After that, it served as the home of the Parliament of England, which had met there since the 13th century, and also as the seat of the Royal Courts of Justice, based in and around Westminster Hall. In 1834 an even greater fire ravaged the heavily rebuilt Houses of Parliament, and the only significant medieval structures to survive were Westminster Hall, the Cloisters of St Stephen’s, the Chapel of St Mary Undercroft, and the Jewel Tower.

In the subsequent competition for the reconstruction of the Palace, the architect Charles Barry won with a scheme in the Gothic Revival style, specifically inspired by the English Perpendicular Gothic style of the 14th–16th centuries. Augustus Pugin, a leading authority on Gothic architecture and style, assisted Barry in designing the interior.

Construction started in 1840 and lasted for 30 years, and works for the interior decoration continued well into the 20th century. Major conservation work has taken place since then to reverse the effects of London’s air pollution, and extensive repairs followed the Second World War, including the reconstruction of the Commons Chamber following its bombing in 1941. 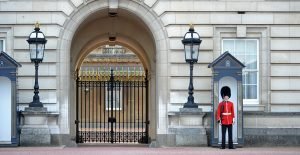 Click on the image to take a virtual tour

Buckingham Palace is the London residence and official residence of The Queen.

It has been the focus of many moments of national celebration, but is also a busy working building welcoming tens of thousands of people through its gates each year for investitures, garden parties, audiences and other events.

Originally known as Buckingham House, the building at the core of today’s palace was a large townhouse built for the Duke of Buckingham in 1703. It was acquired by King George III in 1761 as a private residence for Queen Charlotte and became known as The Queen’s House. During the 19th century it was enlarged, principally by architects John Nash and Edward Blore, who constructed three wings around a central courtyard. Buckingham Palace became the London residence of the British monarch on the accession of Queen Victoria in 1837.

The last major structural additions were made in the late 19th and early 20th centuries, including the East Front, which contains the well-known balcony on which the royal family traditionally congregates to greet crowds. 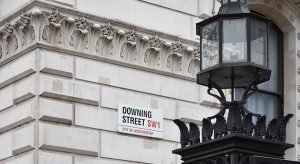 10 Downing Street is the headquarters of the Government of the United Kingdom and the official residence and office of the First Lord of the Treasury, a post which, for much of the 18th and 19th centuries and invariably since 1905, has been held by the Prime Minister of the United Kingdom.

The building is over 300 years old and contains approximately 100 rooms. A private residence occupies the third floor and there is a kitchen in the basement. The other floors contain offices and conference, reception, sitting and dining rooms, where the Prime Minister works, and where government ministers, national leaders and foreign dignitaries are entertained. At the rear is an interior courtyard and a terrace overlooking a half-acre garden. 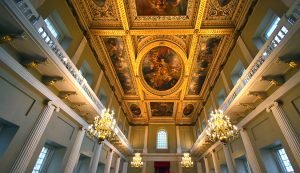 The Banqueting House is the only surviving part of the Palace of Whitehall, which used to be the main royal residence from 1530 to 1698. The building was designed by Inigo Jones in the Palladian style.

The ceiling of the Banqueting House is the only surviving in-situ ceiling painting by Flemish artist, Sir Peter Paul Rubens. The three main canvasses depict The Union of the Crowns, The Apotheosis of James I and The Peaceful Reign of James I.

The ceiling was commissioned by King Charles I. It was one of the king’s last sights before his execution on a scaffold outside the Banqueting Hall in 1649.

The Ritz Hotel is a 5-star hotel situated in Piccadilly. It is one of the world’s most prestigious establishments, known for its luxury and elegance.

One of the first steel-framed structures in London, it was opened by Swiss hotelier César Ritz in 1906. The hotel gradually became a popular haunt of politicians, socialites, writers, actors and royalty.

Tea at the Ritz, served in the Palm Court, is a favourite with tourists from around the world.

Hampton Court Palace is situated in the borough of Richmond upon Thames, on the banks of the River Thames.

Building of the palace began in 1515 for Cardinal Thomas Wolsey, a favourite of King Henry VIII. As Wolsey fell from favour, he gave the palace to the king in 1529. It went on to become one of Henry’s most favoured residences, which he enlarged to accommodate his sizeable retinue of courtiers.

In the following century, King William III’s massive rebuilding and expansion work, which was intended to rival the Palace of Versailles, destroyed much of the Tudor edifice. As a result, the building displays two distinct contrasting architectural styles, domestic Tudor and Baroque. King George II was the last monarch to reside here.

Today, the palace is open to the public and a major tourist attraction, cared for by Historic Royal Palaces. The palace displays many works of art from the Royal Collection. Apart from the Palace itself and its gardens, other points of interest for visitors include the celebrated maze, the historic royal tennis court, and the huge grape vine, the largest in the world. 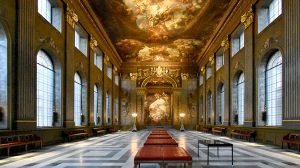 The Painted Hall at the Old Royal Naval College was completed between 1707 and 1726 by the artist Sir James Thornhill. It is one of the greatest decorative painted schemes in England.

It underwent a comprehensive conservation project starting in 2014, during which members of the public were allowed to get up close to the painted ceiling and see conservators at work. When the hall reopened in March 2019, the project won some major awards.

The Old Royal Naval College is the architectural centrepiece of Maritime Greenwich, a World Heritage Site, described by UNESCO as being “the finest and most dramatically sited architectural and landscape ensemble in the British Isles”. The buildings were originally constructed between 1696 and 1712 to serve as the Royal Hospital for Seamen at Greenwich, to a design by Christopher Wren. The hospital closed in 1869, and served as the Royal Naval College between 1873 and 1998. 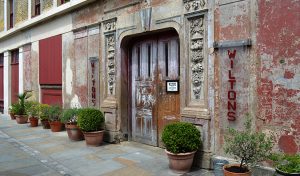 Wilton’s Music Hall is a listed building hidden away in Graces Alley, off Cable Street in Shadwell.

It was built as a music hall and is one of very few surviving examples, retaining many original features. The building is now home to a multi-arts performance space that hosts imaginative, distinctive work with roots in the early music hall tradition, such as opera, puppetry, classical music, cabaret, dance, and magic.

Situated at the heart of the historic East End within easy walking distance from The Tower of London, the River Thames and the City, it is a focus for theatrical and East End history, as well as a living theatre, concert hall, public bar and heritage site.